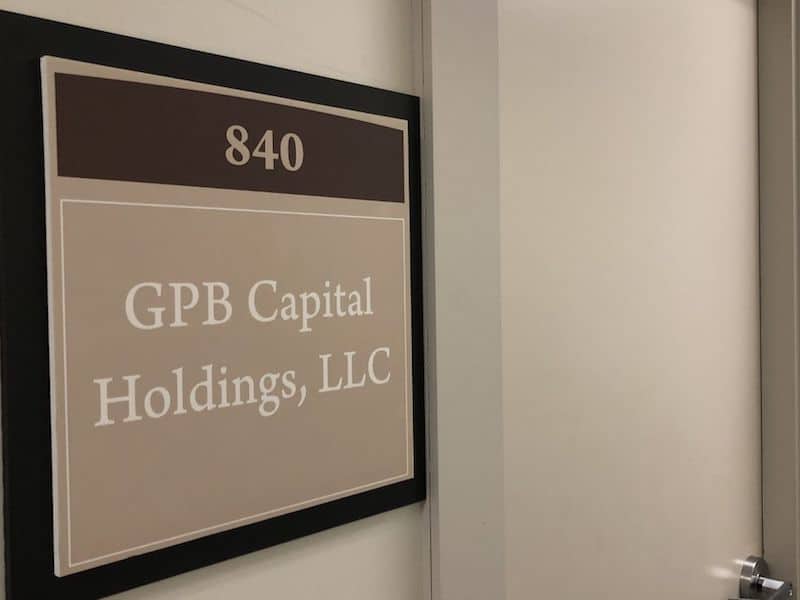 Posted at 14:51h in Blog by phil korosec
0 Likes
Share

CLEARWATER — The office in downtown’s One Clearwater Tower is nondescript, with a single door on the eighth floor, two stories above the temporary City Hall.

But inside GPB Capital Holdings LLC is a whirlwind of turmoil. Investors and a former employee have filed multiple lawsuits, while the FBI and the U.S. Securities and Exchange Commission have launched investigations.

Among the allegations against the private equity firm founded by businessman David Gentile: that GPB is operating as a Ponzi scheme and has connections to a Russian crime figure.

The firm is based in New York City, but GPB Capital has roots in Tampa Bay. Along with his office suite in downtown Clearwater, Gentile owns a condo in Water’s Edge, two blocks from the Church of Scientology’s international spiritual headquarters, where Gentile is a member.

GPB Capital is also an equity partner in the proposed Riverwalk Place in Tampa, a $350 million, 50-story condo near the Hillsborough River billed to become the tallest condo on the Gulf Coast.

The project, at least five years in the making, was being developed by Feldman Equities of Tampa in partnership with the south Florida Two Roads Development firm. But on Tuesday, Feldman Equities, led by Larry Feldman who is also a member of Scientology, announced it pulled out of the project that has not yet broken ground. The move leaves Two Roads as the sole developer and GPB Capital as the equity partner. […]

Gentile formed GPB Capital in 2013 with partner Jeffrey Schneider as an income-producing private equity fund. But a federal class action lawsuit filed in November in Texas, one of at least a half dozen complaints against the company, alleged it had been a Ponzi scheme from day one.

The company billed itself as a firm that buys income-producing auto dealerships and waste management businesses with capital from investors. It promised investors 8 percent returns. But what transpired was fraud, the lawsuit alleges.

“Those purported returns were generated not by actual investment returns, but by tapping the capital investments of the next round of investors,” according to the lawsuit filed in the Western District of Texas.

Much of the $1.8 billion GPB generated in investment capital was funneled into the pockets of the company’s principals, the complaint alleges.

The scheme was also propped up by “a series of self-dealing transactions” and a web of fraudulent businesses entities, according to the complaint.

For example, GPB Capital, through one of its limited partnerships, bought a company that owned a number of car dealerships. But the auto group was actually owned by Gentile and a string of partners, including two daughters of Michael Chernaya, an alleged leader of one of Russia’s most infamous crime groups, the Izmailovskaya. Chernaya was wanted in 2011 by Interpol for money-laundering and organized crime.

None of the conflicts were disclosed to investors, according to the complaint.

The allegations of fraud mirror a series of other class action lawsuits filed by investors in California, Florida and New York.

In October, the Department of Justice charged Michael Cohn, GPB’s then-chief compliance officer, with obstruction of justice and unauthorized disclosure of confidential information.

Before joining GPB a year earlier, Cohn was a securities compliance examiner for the Securities and Exchange Commission. In discussions with GPB officials about a job, Cohn disclosed he could provide inside information about the SEC’s investigation into the firm, according to the indictment filed in the U.S. District Court for the Eastern District of New York.

Federal law enforcement officials allege Cohn took records from the SEC — including private attorney-client documents, contacts with law enforcement and regulators, and other confidential information — and provided them to GPB’s senior management.

Cohen has pleaded not guilty. In addition to the SEC investigation, the FBI in February 2019 searched GPB’s New York office.

Amid the half-dozen or so lawsuits from investors, GPB is also facing allegations of fraud from a former employee.

David Rosenberg, the former CEO of Prime Motor Group acquired by GPB Capital, alleged in an updated complaint in November that GPB “engaged in a massive securities fraud” and ousted him after he tried to expose the misconduct.

In November, InvestmentNews reported GPB Capital has failed to produce audited financial statements for its funds, meaning “investors don’t know the value of the GPB funds, and thus, their investments.”